John Wick 3 is finding success with a Reddit Ads campaign using a 3 year old tactic proven by Toyota in 2016, giving away Reddit Gold.

The ad appears designed more to build top of mind awareness for the DVD release expected on September 10th rather than to drive any direct action. The ad is fairly simple, it asks “When Halle Berry says, “jump,” you jump. Tell us what the dogs are thinking with a caption in the comments below. The best captions will be rewarded with Reddit Gold.”

Their ad has been live for nearly a full week now and has racked up 261 comments with only a 29% upvote rate. A 29% upvote rate would normally bury a post on Reddit, but in this case the ad plus the Reddit gold giveaway instead has driven engagement with the post.

Reddit Ads that allow comments have a direct URL, you can see this ad here: https://www.reddit.com/comments/cujebl/when_halle_berry_says_jump_you_jump_tell_us_what/

Google has started using Reddit Ads to promote their new smartphone, Pixel. And it would appear they are running more than one ad to experiment with ad copy and the Reddit Ads platform.

We don’t have a lot of data to understand how well the Pixel ad running on the front page is doing, but we started tracking it about 2 weeks ago when it had just over 400 upvotes and it now has almost 500 upvotes. Using this we’ve backed up and estimated the ad has run for about 2 to 3 months, or roughly 2 months after the official release date for the Pixel phone on October 20th, 2016.

The ad itself is rather simple and straight forward featuring the new Google icon multicolored G logo many Android and iPhone owners are familiar with. The copy also features a review score from a well known rater of video / camera quality, DxO, stating that Google’s Pixel has the highest ever DxOMark for a mobile device, something the DxO website corroborates.

The ad copy finishes with a display URL typed out, google.com/phone, which when typed in redirects users to: http://madeby.google.com/phone – the homepage for the Pixel phone. This decision is a little perplexing as the url provides no tracking or additional analytics data.

While refreshing the front page and subreddit’s looking for the Google ad again after a few weeks I noticed what looked like the same ad but with different ad copy on the homepage and across subreddit’s. For example the original ad mentioned the quality of Pixel’s camera but that ad wasn’t the only one showing on subreddit’s like /r/videos that might be more inclined to care about camera quality.

Here are the other two ads I saw running

This ad’s copy reads: “Meet Pixel, Phone by Google. The Pixel combines hardware and software made by Google, including all of your favorite Google apps, to bring you a fast, seamless, and easy-to-use experience. Learn more at madeby.google.com/phone”

A yet third version of the ad reads: “Meet Pixel, the first phone with the Google Assistant built-in. Ask it anything. Learn more at google.com/phone.”

Google didn’t build out a new landing page for this ad campaign. All three of the ads use UTM parameters to track the success of the ads, but the landing page is the organic landing page anyone would navigate to using Google search.

For the last few weeks Toyota has been running a few ads via the Reddit Advertising system. The four ads they have been running share a few things in common; they all use a question as part of their ad title and they all include an embedded YouTube video of a recent Toyota Rav4 Hybrid commercial. Toyota’s team also engaged with users in the comments of each ad and doled out Reddit Gold as a reward for top comments, the title of 2 of the ads included a mention of the Reddit Gold giveaway.

This technique appears to be pretty unique as far as Reddit Ads go and earned Toyota thousands of comments across the 4 ads. We clearly don’t now how efficient or effective of a campaign this was in terms of ROI for Toyota, but it shows a nice blueprint for other brands and businesses trying to drum up engagement on the Reddit website via the ads system.

To try and detect how well a Reddit post or ad performs we use a metric we call Engagement Points. When we calculated the Engagement Points for the 4 Toyota ads we quickly discovered that ads that included the mention of Reddit Gold performed better with the improvement being between 100% and 165%. 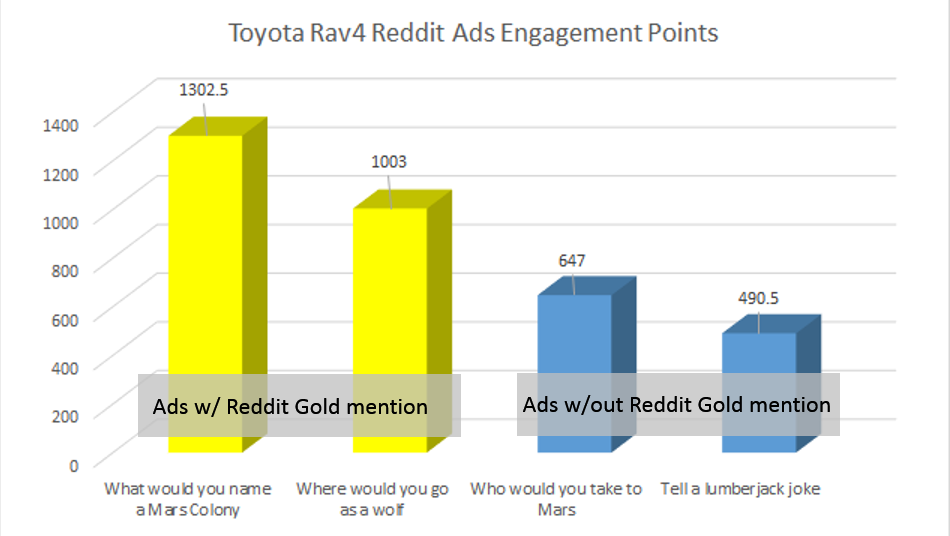 AD: Who would you take to Mars

AD: What would you name a Mars Colony

AD: Where would you go as a wolf

This is the first large scale advertising campaign we’ve seen on Reddit by a major brand. We’ve reached out to Toyota to see if they’ll share more details about the campaign and will let you know if there are any updates.