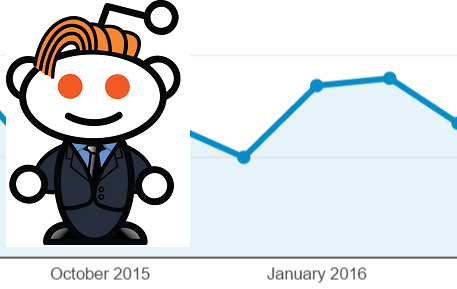 On December 4th, 2018 Reddit announced major improvements to the Reddit Ads Conversion Pixel. This Pixel allows you to track website traffic and conversions, but that data is only trackable by Reddit and not your Google Analytics or other third-party analytics software such as Adobe Analytics.

New Reddit use the rel=noreferrer attribute on links within ads on the site. This means that you can’t track the success of your Reddit ads inside of Google Analytics or any other tracking program except for Reddit’s ad system by tracking the number of website visits, sales, or lead gen conversions from Reddit.com. This is absolutely terrible and should never have happened. I’ve asked Reddit to fix this but have received no response.

Why Do Google Analytics and Reddit Ads disagree on clicks?

This question pops up constantly. The answer is fairly complex and Reddit hasn’t as of yet offered an official explanation, here is our current understanding. Reddit is a community comprised of some of the most tech savvy users on the internet. Many of these likely block ads on other websites, but not on Reddit. Frequently when an ad blocker is used it also blocks Google Analytics.

This could be the reason that Google Analytics and Reddit Ads do not agree. To help understand how well your Reddit ad performed instead of Sessions or Pageviews as tracked by Google Analytics try these KPI’s and tracking techniques.

1. Install and use AWStats. This software program tracks at the server level and is less likely to be impacted by Adblocking software that blocks or complicates Google Analytics. Look at the referring sites column and examine the “Unique Visitors” and “Bandwidth” used by visitors from Reddit.com. AWStats does track differently than Google Analytics using ip addresses over cookies meaning it could easily double count visitors using dynamic ip addresses or multiple devices using 1 ip address as only one visitor (i.e. a college computer lab). Here;s a really good comparison of Google Analytics and AWStats by UltimateWeb

2. Track Conversions Specific to Reddit Ad Campaign. Reddit doesn’t YET offer a tracking-pixel and given the website users’s aversion of being tracked are less likely to do so than say Facebook, Twitter, or even Tumblr. Even if they did it offer this and it worked well, it would be impossible to validate Reddit’s pixel data with your own Google Analytics due to blocking. Instead if your Reddit Ad is focused on getting Form Fills (Lead Generation) use a form software such as Gravity Forms that tracks entries inside of your desired CMS (i.e. WordPress). Create a form specifically for your Reddit campaign and either use a custom landing page, UTM tags, or referrer data to show the Reddit ads form to Reddit advertisers and track the effectiveness this way.

3. Use Coupon Codes. If you’re running a retail or event operation that relies on making sales use a custom coupon code for your Reddit Ad campaign. This will help you track the effectiveness and ROI of your campaign. Make sure you have AWstats installed and compare the sales data to Unique Visitors in order to calculate an estimated ROI of your campaign and improve your campaigns over time.

4. Track Reddit Engagement. Instead of tracking website visitors track how users engage with you on the social media website itself. Try things like; promote your own Subreddit, Ask questions, Give out Gold (see our Toyota Case Study), Track brand mentions before and after the campaign on Reddit, or Promote a narrative (i.e. the best blank of blank is blank) and track how that spreads across the site.